a performance of the audience - textile installation 2022 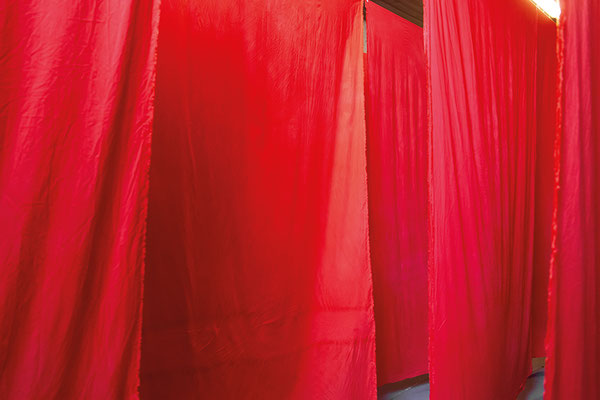 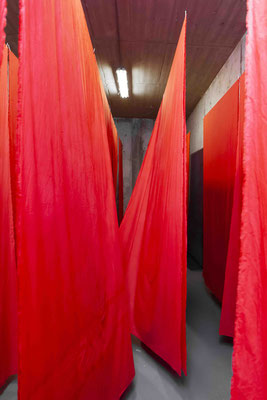 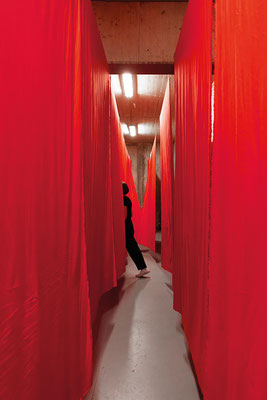 Of the Drying of Red Cloths

With breeze, Toni Wombacher has created an expansive installation that already bears its meaning in its choice of material. The conceptually working artist is always trying out new materials and techniques for her various series. She has a strong feeling for surfaces, for their differences and transitions, details and meaning. Thus, on the one hand, a found material can initiate a work of art, and on the other hand, an artistic concept can trigger the search for a material.1 Even if, as a result, her series seem completely distinct at first glance, they are held together by a conceptual framework that encloses the works over the years. The series Shades (2021-22) presented in this catalog belongs to the same group of works in terms of content and form as the expansive installation breeze (2022).

Wombacher’s work with textiles is part of a long tradition. The first textile art works were probably carpets and tapestries, the latter often functioning as figurative image carriers comparable to paintings. Until the industrial revolution, textiles could only be produced by hand. It was not until the advent of technology and automation that much cheaper mass-produced goods were produced. In the academic distinction between applied and fine arts in the 18th century, textiles were assigned to the former. The attribution of femininity and domesticity played part in the evaluation. However, the equation of textile arts with female arts and crafts was also used politically, for example by the suffragettes.2 Contemporary artists still use textiles to address feminist and emancipatory issues3 while others work to overcome any attribution to gender.

An example relevant to the reception of Toni Wombacher’s art is the knot work of Cecilia Vicuña. Toni Wombacher had seen her presentation Quipu desaparecido (Disappeared Quipu) (2018)4 at the Brooklyn Museum. The Chilean’s influence echoes in the parallels of immerssiveness, choice of materials, and attachment of textiles to the ceiling of the room. Cecilia Vicuña’s Quipu works use indigenous knot writing to memorialise Andean peoples oppressed by Spanish colonial rulers. Toni Wombacher’s frame of reference is different, European; she uses the fabrics to refer to gender-specific role of women and hints at the still ongoing struggle for equal rights.

For breeze, five steel cables with hand-dyed fabric panels were hung in a windowless passageway room at the Kunstverein Familie Montez. The association with clotheslines, the drying sheets aired by a breeze, is deliberately evoked. But the colourfulness virtually screams that this is not about drying immaculate, white laundry in an idyllic house-with-garden world. One literally sees red in view of space. A dominant colour that radiates an energy that touches deeply. The question is where the colour comes from or what it signifies. According to the artist, the red symbolised “blood, [...] love, [...] life, aggression”5, an accumulation of suffering and pain but also warmth and passion. The choice of fabric as a working material and the subconscious, stereotypical, link between housework and women alone is enough to suggest associations with female bodies and blood.

While male bodies bleed exclusively due to injuries, women experience menstruation, and this, although unfortunately often associated with pain, is not an injury in the sense of a deviation from a healthy normal state. Rather, it is based on the potential to give birth to new life. Menstruation has been a common theme of feminist art since the 1970s and Judy Chicago’s Red Flag (1971), as it is still preferred to be left out of the public sphere or even punished by exclusion in some cultures, even so it affects half of the population for some time in their lives. Female bodies are not a deviation from a male norm. Examples of the huge lack of understanding coming from non-menstruating people are the desert of (clean, free,) public toilets in Germany, the classification of menstrual hygiene products as “products of daily use”6 that happened in Germany in 2020, or the emotionally negative reactions to a draft law on extra days off for menstrual cramps in Spain.7

As an explanation for the colourfulness, in addition to menstruation and bleeding during childbirth, blood-stained sheets come to mind as evidence of a first sexual intercourse, which represents an extremely patriarchal view of the female body. Given this thematic gravity of the pain and suffering of female bodies, Toni Wombacher must have chosen the title breeze ironically, and perhaps with the intention to deceive at first glance. There is a raging storm inside the installation. She writes about her work: “breeze is a call for a necessary social ventilation, a demonstration for a change in the living environment, a resistance movement. The ‘sheets’ dipped in red correspond to red flags and symbolise the struggle. It is a manifestation and a beacon.”8 Examples around the world show that despite good intensions, it is still a long way to equality which needs profound social change. The list of examples of misogynistic structures is long and ranges from the planning of public infrastructure to the right of self-determination over one’s own body, or equal pay for paid work as well as recognition for unpaid work, to the de-tabooing of natural bodies and their functions. Toni Wombacher shows with breeze that these painful experiences can also be expressed in highly poetic and aesthetic artworks.

A not only formal counterpoint to the extroverted colour of breeze is posed by the mobility and softness of the cotton fabric. In contrast to many other materials, especially sculptural9 ones, textile is soft, flowing, remains mobile and radiates warmth. Toni Wombacher needs to surround herself with her materials and works and feel them. Consequently, the cloths for breeze and the series Shades I - V were created in a complex production process both in the studio and her apartment. The intensity in the spatial, temporal and physical dimensions of the production can be felt in the energy of the finished works. Her artworks are expressions of deep feelings, of affection and love.

breeze and the Shades share the same base material; cotton fabric sheets dyed red by hand. In Shades, Toni Wombacher mounts the fabric panels on wooden stretcher frames so that they overlap like sheds, forming an armour that separates spaces, protecting an inside from an outside. A strip at the upper edge remains unpainted, a compositional horizon that, when viewed, helps the viewer perceive the work as a picture and not (only) as an object through its association with the landscape. The traditional elements of painting; canvas, stretcher and paint, are recomposed for these paintings. The canvas is loosely stapled in horizontal strips to the framework of the stretcher.10 This work with stripes parallels the late work of Agnes Martin, whom Wombacher admires for her delicate yet eerily powerful abstract geometric paintings. Like Martin, Wombacher chose abstraction to express non-representational themes and sensibilities.

breeze, too, is made up of stripes that are staggered in space and arranged in parallel. Toni Wombacher calculated the distance between the fabric strips of breeze in such a way that visitors can wander between them and at the same time are likely to touch the textile. Feeling the fabric on the skin is a delicate, almost tender touch. For the artist, the interior view of the installation is central. Only when one enters, interacts with the work, does it unfold its full potential. The interior is confusing and encloses people like a cave, despite the multiple access points. The installation could also function as a protective shelter, for example from unwelcome, curious glances, similar to the adjustable Japanese screens made of paper. However, the interior (view) refers not only to the physical experience, but further to the individual associations and associated emotions that are triggered in visitors.

breeze is located directly adjacent to the permanent installation on the recently deceased Hermann Nitsch (1938-2022). The nearby documentation room, already installed in 2014, is also dominated by red, by colour gradients, by the association with blood. But the energy is completely different. The Viennese actionist and Gesamtkünstler used actual blood in early actions, later red paint was enough. His art is large-scale, loud, raw, brutal, violent, has a disturbing, frightening, overwhelming effect on some. breeze stands in stark contrast to this, the material and movement appearing considerate, without aggressiveness and yet determined and powerful.

Another artist who influenced Toni Wombacher and who created a lot of her art with textiles is Louise Bourgeois. She had already learned textile techniques as a child in the family’s tapestry restoration workshop and later fell back on these as well as on old pieces of clothing to process childhood traumas in her art. The vehemence, snap, humour, honesty, unpretentiousness, also in relation to personal, psychological traumas, make a lasting impression on Wombacher. Toni Wombacher works actively and self-confidently with the female connotation of fabric, with the association of the domestic, the private, which is still seen by many as the gender-specific space of women. She exposes the construction of identity in relation to gender and the stereotypes attached to it. By creating an expansive, public installation made of textile, she breaks down the dichotomy of female/private and male/public.11 The play of materiality and colour, of strength and vulnerability, of self-confidence and self-doubt, of aggressiveness and seeking protection, shows that ultimately the most diverse emotions and sensations coexist, regardless of gender.

3 A well-known contemporary example are the pink pussyhats. These were worn in the USA in 2017 at the Women Marches as a symbol of women’s rights and in protest against Donald Trump’s upcoming presidency. A simple knitting tutorial invites people to knit their own. See: https://www.pussyhatproject.com/ und https://www.vam.ac.uk/articles/the-pussyhat.

5 Toni Wombacher (2022) unpublished artist statement on Shades on the occasion of the exhibition :innen malen “painting inside”.

7 Cf. https://www.deutschlandfunknova.de/beitrag/menstruationsurlaub-was-das-neue-gesetz-fuer-menstruierende-in-spanien-vorsieht, note that the German term “menstruation vacation” is extremely unfortunate, as it is not a holiday but an additional granting of sick days due to biological bodily functions.

9 Sculptures are classically made of stone, metal or wood, for textile sculptures the differentiating term “soft sculptures” was coined.

10 Cf. Edwin Schäfer (2022): “The tree boundaries of painting. On the Shades series of works by Toni Wombacher”. In this catalogue.

gender is not a fact, the various acts of gender create the idea of gender and without those acts there would be no gender at all. Gender is thus, a construction that regularly conceals its genesis.” In: “Performative Acts and Gender Constitution: An Essay in Phenomenology and Feminist Theory,” Theatre Journal 40, no. 4 (1988): 522.