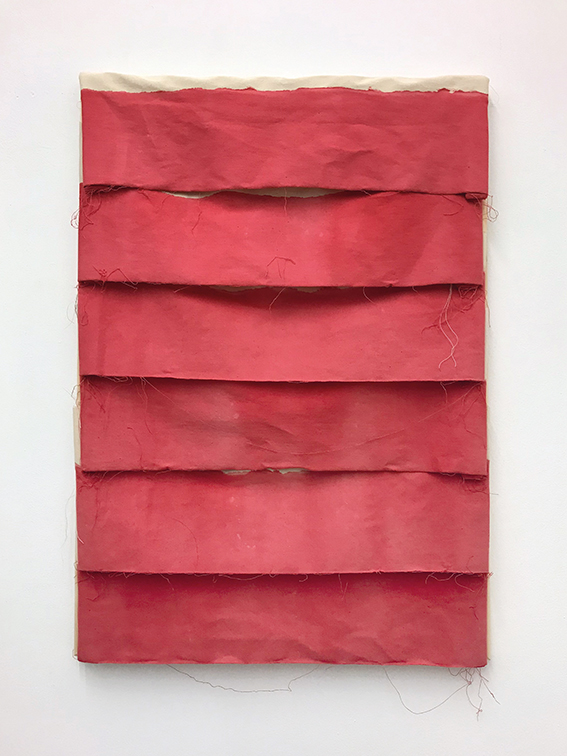 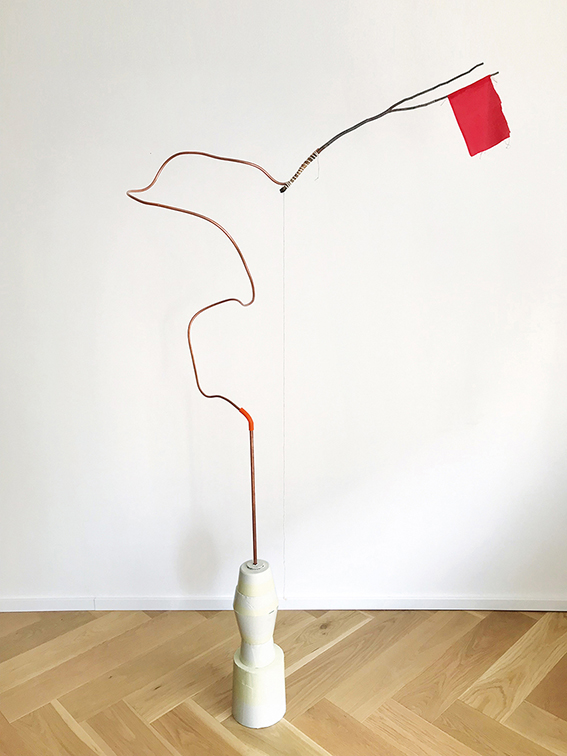 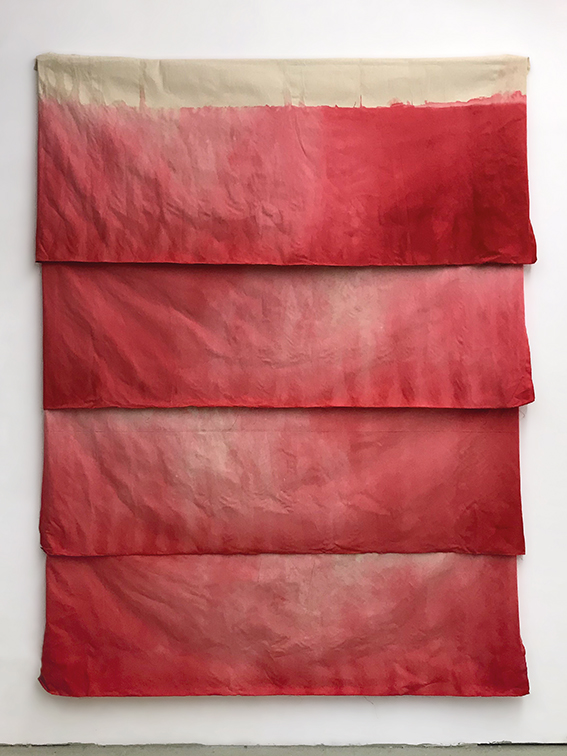 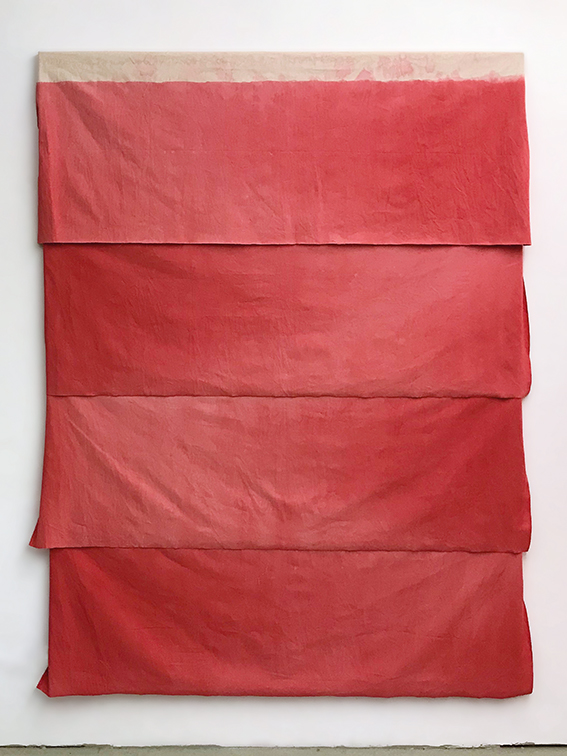 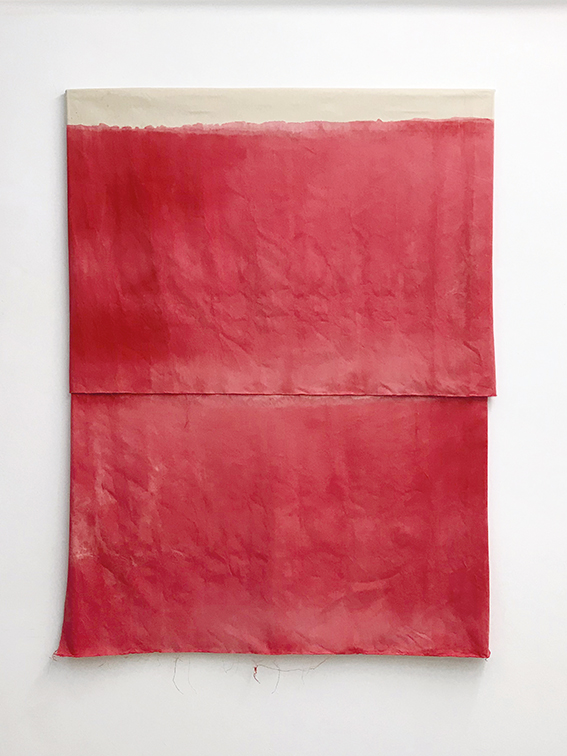 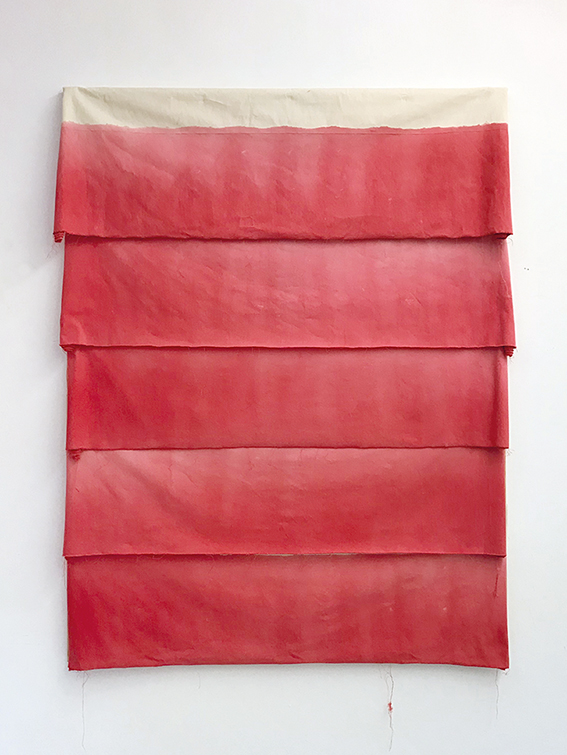 The Three Boundaries of Painting

On the Shades series of works

In her new series of works, Shades, Toni Wombacher asks fundamental questions about the possibilities of painting, the image, and the pictorial object. All the elements of traditional painting appear in these works, but they appear in a way, unfolding here a discourse that poses questions about the possibilities of painting in a completely new way.

Stretchers, cotton fabric, and paint are the components of these works, and the ways in which they are used in the works pose a series of questions to the recipient.

Thus, the stretcher frame forms a basic framework of the work, which, however, does not remain hidden in the background, but remains partially visible element of the pictorial design from the lateral position of the viewer, thus forming the basis of the sculptural effect. The cotton fabric poses the question of the pictorial and object character from the other side, as it were. It does not completely cover the stretcher; only a few staples hold it to the stretcher. The cotton cloth unfolds an autonomy that refers back to its own essence. Folds, folded edges, frayed selvages, and fabric structures bring the cloth in its uniqueness into the focus of attention.

Color now appears as the third and decisive element. The cotton cloths have been dyed poppy red, thus referring in a very fundamental way to the nature of painting as a technique of dyeing. The cotton cloth is dipped for a certain time in water enriched with pigments and taken out again after reaching a certain depth of color. All the tools of traditional painting, such as brushes, paints from tubes, pencils and the like, are dispensed with to allow a non-individual, basic act of applying color. This is not a private narrative gesture, but painting in a sense creates itself from its own autonomous possibilities.

It should also be pointed out here that Wombacher does not lose herself in the craftsmanship of coloring. It is a cursory appropriation of a craft technique for the purpose of conceptualizing the idea of painting, not the presentation of the perfectly dyed cloth.

In this act of omission, Wombacher thematizes two fundamental boundaries of painting, on the one hand the uncovered edge of the fabric as the material image carrier itself, and on the other hand the edge of the color surfaces, which thus appears as the boundary of the painterly form as such.

In addition, Toni Wombacher introduces a third border into her pictorial object. Cloths in the form of horizontal webs are used. They constitute the picture in its objecthood, and here Wombacher finally leaves the realm of traditional painting, creating in the illusion of a pictorial space a material boundary, a difference, a discrepancy between the various cloths. She creates an image composed of fragments, thus opening a space of depth that allows the discursiveness of the work.

Wombacher shows the separation that runs through all our ideas of art and the world, but not in the form of a martial gesture, but as an overlapping of floating red cloths that can almost be called tender.

In the Shades series of works, the artist works on a conceptualization of the pictorial object and the painterly questions, she dissolves apparent self-evident facts, detaches them from their context, deconstructs them and achieves a new definition of the materiality of the image.

Wombacher's definition of the pictorial space is delimiting. In the same movement of the gaze, it shows and withdraws the idea of a spatiality taking place in the picture. The superimposition or overlapping of the colored cloth webs stands for a staggering or layering of the pictorial space, however, not with the means of an illusion of depth, but as a real event of the material. In the concrete reference to the edges of the cloths, which form the central creative element of the object, this very boundary of painting becomes the content and theme of itself.

Wombacher is not in search of the ideal image. It is precisely in the variability of the number of cloth panels in the different works of the series that she shows the space of possibilities inherent in this artistic question. The viewer is actively involved in this process by being able to switch back and forth between the different overlaps in contemplation. Last but not least, there may be a desire to touch the surface. The idea of lifting the cloths and looking behind them imposes itself immediately. One could speak of a secret that is hidden behind it, but it could also be that it is only the framework of the picture.